Books:
Theme for the month:
Posted by Sara Ibbetson at 10:19 AM 2 comments:

Have you ever run 12 miles into gale force winds? Because I now have!

Only a slight exaggeration. 😉

This may be my shortest race recap in history - it's been a busy time and I don't have much to report on this one. Based on the women on the starting line and my non-peak state, I knew that winning masters was likely going to be the best I could come away with, and after mile 1 I felt my choices were to run all out and get 5th OAF and win masters, or to take it easier and potentially help a friend break 1:30, while still getting 5th OAF and winning masters. I chose the latter, also based on the 25 mph headwind and my residual fatigue from my sickly Boston.

Running 1:30:40 was harder than I expected, but having a significant headwind on a point-to-point course probably accounts for that! I love this race but even if I'd have run all-out I think I'd have come away with my slowest time on it (I was expecting 1:25ish without the wind).

My main reason for doing this race was a to take a little racecation, and I greatly enjoyed it with my friends Sarah and Sean - also kind of a going away party for Sean before he moves to St. Louis. My parents ending up meeting us in Manhattan, and there were a lot of memories and laughs for the weekend.

I want to get back to where I'm confident I can compete when I'm on a starting line, instead of resigning to being unable to keep up with the other women who show up, but this wasn't the day for that.

Results are here - I'm listed at 2nd masters but the OAF was also first masters so I got to move up. 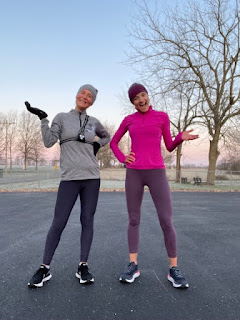 Boston wrecked me, body and mind. I didn't get as sick after the race as I did after Houston 2020, but the difference was that when I ran Houston sick I was at the very beginning of the illness (became sick the day before the race) whereas with this one I was in the middle of it. I keep coming back to beating myself up about running so much worse this time being sick than I did in Houston, especially because I wasn't wheezing this time and I was in Houston, but I think it was just timing. In Houston I hadn't lost my strength yet and this time I had. I took 5 days off running post-marathon, tying my PR for days off that I set after Houston. On day 6 I woke up itching to run so I did - though slowly. Right now I feel like it's going to take me forever to feel normal again, but that is probably dramatic and I am vowing to be patient.

I had a great training cycle and I know the fitness will help me in the future, though currently I feel too weak to believe it. I am thankful that I had two solid [but not perfect] races this season with my 50k and 20k, plus five for-fun training races that were really enjoyable. I wish I could celebrate my performance in Boston, but I can still celebrate the training cycle. Pre-race someone said something like, "You don't have to wait to celebrate your race; celebrate the successful training that brought you here!" That is hard for someone who is performance-oriented to swallow but I really did love the training, every crap weather bit of it!
It's also hard to swallow the end of my sub-3 streak; I hadn't run over 3 hours since I broke it for the first time in 2016. I am sure no one but me cares that I've run 14 (and counting, hopefully!) sub-3s instead of 14 consecutive sub-3s, but it saddens me. However, the streak was not worth a Boston DNF to me so I don't regret that part. [Although this solved my dilemma on whether or not to count my 50k marathon splits as sub-3s, with Frisco being sub-3 but Prairie Spirit being 3:00. I can say they both go into the count without changing the streak, meaning that the streak actually ended at Prairie Spirit and that Frisco counts into the 14 total!
It's going to take awhile for me to come back from this, but I really do love running every day, so I will focus on that privilege. During the race I heard the song "The Dance" playing, which is an odd song to be playing at a race, but it really resonated with me. I could have missed the pain of a sickly much-slower-than-goal marathon, but then I'd had to miss the thrills of the training cycle and the racecation memories that will last forever.
“There are two ways to get enough. One is to continue to accumulate more and more. The other is to desire less.” - G.K. Chesterton 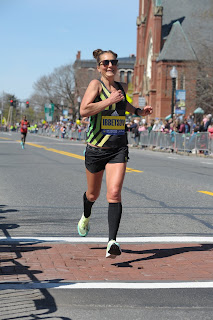 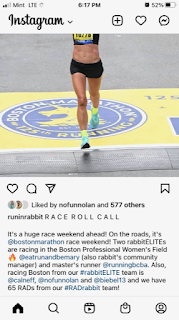 After the Monday race, Amy and I had two more days to be tourists! I worked at the rabbit pop up on Tuesday morning, which was really good timing because it was raining. Amy dragged Colin to two Lululemon stores, and they came by rabbit while I was there. rabbit had some insane deals on their last day being open and I bought 14 shirts to give to my running group.

Colin headed to the airport after we all ate lunch at Which Wich (which I love but we no longer have in Springfield), and Amy and I headed to the Freedom Trail. It passes nearly all of the major historic sites in Boston, so we got to see it and shake out our legs with over 7 miles of walking. The downside was that it was cold and sporadically rainy. We had to tuck in under awnings and into coffee shops a few times, and by the time we finished seeing the U.S. Constitution we were pretty much frozen and done. We had dinner at Joe's on the Waterfront, missed going to Mike's Pasteries, and took the subway back to our hotel (my first subway experience, not recommended).


Back in our room, I cut off the top part of the sign to take home with scissors from the front desk of the hotel. On Wednesday we enjoyed touring Newbury Street, including the Tracksmith Track House. We looked into doing a trolley tour but we'd already seen nearly every site on it during our other touring trips. I also looked at going to the Boston Tea Party Museum but it was closed on Tuesdays and Wednesdays. We went to Marathon Sports and Eataly before heading to our 4:50 p.m. flight. Travel home went much smoother than travel to Boston, and we actually got to eat dinner in the Chicago airport instead of running through it. We were both exhausted on the final day of trip, but I didn't want to it end!

Although the race itself was very much not what I wanted, the trip as a whole was amazing. I'm thankful that I felt well enough to enjoy every other aspect (if I'd have felt like I did on the Tuesday and Wednesday before we left, I'd have had to lay in my hotel room the entire trip). I felt free of responsibilities and laughed more than I have in a long time. We made countless inside jokes, and I have memories that will last a lifetime. Hopefully the disappointment of the race will fade and I will pointedly remember the rest of the racecation fondly. I am already dreaming of my next!

After I crossed the line, I walked on my jello-like legs through the chute. Before I made it very far, I was pulled into the VIP area. I hadn't received my finisher's medal yet, so when I was diverted all I could manage was, "Do I get a medal?" haha! I had not nearly killed myself to finish my worst marathon in years to walk away without a Boston medal. They had me continue walking to a medal and space blanket area, then grab a bag of food and head into the pro area we'd started the day in.

Someone gave me my bag after I walked in, and I reunited with Jen, who had also had a rough day (3:08) and was sitting on the floor. I am currently in a clinical study for a performance glucose monitor, so I had a glucose monitor on my arm and one of the medics started asking me about my blood sugar levels and telling me I needed to eat right away. I tried to explain that I wasn't diabetic but he never seemed to believe me. I also connected with Nick, who was in the room with Mary who he currently coaches, and the medic kept yelling at him to make me eat my sandwich. The medic then wouldn't let me leave the room to change so I had to go behind this half partition thing to get into dry clothes. Later he went on to give me and Jen lectures about how you should drop out if you're having such a bad day and find another marathon to nail [facepalm].

Nick was the first person I said more than a sentence to, and I ended up bursting into tears while talking to him. I've had marathons that I thought were bad before, but nothing compared to this one! It made laugh at 2015 Sara ("You thought 3:01 was terrible when you were aiming for 2:59?!"), 2020 Sara (2:58 with bronchitis), and really at the Sara who ran 2:46-2:47 thinking it was terrible - and sometimes you do just have to laugh so you don't cry! I know it was because my body was wrecked and weak from being sick, but it's still quite heartbreaking, especially on this stage (although if it would have been a local race I would have DNSed).

There were a few pros left in the room, including Steph Bruce getting a massage. Since Jen was also getting one, I had a short one before we walked back to our hotel together. The masseuse tried to get me to see their podiatrist if I had blisters, and when I declined she tried to pull my socks off to check but couldn't manage to remove the compression socks (I had on pants at this time too). The medical staff were pushy! They didn't have Ibuprofen either, so I had to grab some at Walgreens since I'd forgotten to pack it.

Jen and I met Colin back at our hotel, and celebrated his 2:48 PR! I definitely need to keep running the same goal races as athletes I coach, because it gives me something to be proud of if my own race is crap. Jen was flying out that evening, so she rushed to shower and pack up. Amy eventually returned from her post-race Unicorn Club area and we celebrated her 10th consecutive Boston and 3:32 finish - she was hoping to slide under 3:30 but was overall happy. Then I pretty much just laid in bed while chatting and answering messages until we decided to go buy some wine before heading to dinner at Atlantic Fish!

We got lost and walked what felt like miles to find the restaurant, then service took forever but we enjoyed ourselves. We then had some wine, told a lot of stories, Colin headed back to his hotel, and Amy tried to go to sleep while I was still wide awake. I typically struggle with sleeping after marathons, and wine seems to help (post-marathon is the only time I drink anything alcoholic) but I think I was just so wrecked from this one that nothing really helped. I managed about 2 hours worth of sleep but chalked it up to better than zero!