Life Highlights
Books:
Theme for the month:
It was freezing, but there was frosting.

"Happiness is reality minus expectation."  I always realize how true this quote is when I run a race that exceeds my expectations, even if it's not a top performance.  I chose the local Cabin Fever Reliever 20k as a rust buster, and after running the difficult course in training I figured if I could run in the 6:30s it would be a great day - as in, anything under 6:40 pace would be a success.  I ran by feel because I always seem to race best that way, and as I neared the finish line I saw the clock still in the 1:19s so I kicked hard to get in excitedly at 1:19:41, which is 6:24 average pace (6:15 grade adjusted) and technically a PR.  I was the 1st overall female and broke the Missouri state road racing record for 20k for age 40; plus only two women in Missouri of any age have ever run faster 20ks.  I was most pumped by how strong I felt throughout the race in spite of sub-par conditions (hills, wind, running solo).  It was a great reminder of how much I love racing. and I can't wait to do it again!

I busted the rust after over a year away from racing (my last was the Houston Marathon on 1/19/20)!  The Cabin Fever Reliever was the perfect way to ease back into competition, because it is a small event, it takes place less than 10 minutes from my home, and it is an uncommon distance.  For a related bonus, the Missouri State single age road racing records for the 20k distance are soft, as was my actual 20k PR, although I wasn't exactly sure what it was.  I ran a 20k time trial in September 2020, but time trials definitely have asterisks in my book, plus I didn't think I could beat that time anyway, hah.

I didn't taper for this race, mostly just because I was in a groove with training and didn't want to, but also because the weather was decent and my season goal races are in March and April.  I ran 87 miles the week of the race, but I ran my workout on Tuesday instead of Wednesday to try to give my legs a little extra pop.

Several of my running buddies ran this event, which also included 5k and 10k races, and it's put on by our local running club, so I knew a lot of people, making it easy to be relaxed and laid back - although I was pretty much jumping-out-of-my-skin excited after such a long racing hiatus!  My husband can attest that leading up to this race, I talked about it far more than I ever have about any local low-key event.

I'd run the course twice in training recently, and I've biked and elliptigoed around the rural area it was held on a ton, so I knew what I was in for as far as hills.  This would be a difficult course to negative split on!  I always perform best in races when I disregard my watch, so I did just that, also knowing that my splits would fluctuate based on the hills in each mile.  The first 4.5 miles are a net downhill, then the rest of the race is a net uphill.  To add insult to injury, on race day we had a pretty powerful east wind to contend with during the second half of the race.  It was about 34 degrees with a windchill of 22. 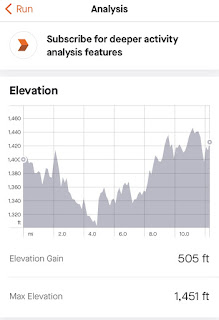 After the gun, the field spread out and I settled into the appropriate effort level for 12 miles (a 20k is 12.43 miles, but the last bit always takes care of itself!).  For the first 4 miles I eyed men in front of me and picked a few off, but from then on I was solo.  Six men finished in front of me, but not close enough to help me much, although I could see the slowest of the six for the whole race and kept trying to catch him, but he was pretty steadily the same distance ahead of me.  I went into this race knowing it was unlikely I'd have any female competition, and I was excited about running a race I had a chance to win (vs. all those big races I've run trying for times in the past several years), but I can never go quite as far to the well without women competitors around me (which is why I ran those big races when I was trying for times!).

The course miles were not marked so I paid attention to my watch beeping/vibrating, and with each beep I'd tell myself, "starting an 11 mile tempo", "starting a 10 mile tempo", etc.  Mile 5 was the first with a couple of very noticeable uphills, one of which has caused me a lot of trauma when biking the area (as in, I almost have to get off the bike and walk it up, lol).  I was feeling good and kept pressing though, and I also took a gel between miles 6 and 7.  I usually don't take in anything during half marathons since they are less than 90 minutes of running, but since I was running 20 miles total I thought I'd need more fuel, plus I love a good caffeine boost during a race!  During mile 7 I started feeling fatigued, but that's not unusual for halves so I embraced it.  I tried to maintain focus and keep the pedal to the metal, but it is harder to do that when running alone.

I knew the stretch from about 7.5-9.5 was going to be tough because it's all incline, and on race day it was also against the wind.  It isn't steep but 2 miles is a long way to race an incline.  I shed my arm warmers and tossed them into a field entrance about halfway through, partially just to give myself a way to mentally break it up (also because I'd had them pushed down since mile 2)! We also had to cross highway 125 during that stretch, which the race organizers can't stop traffic on.  They warned us about this ahead of time, and living in that area I knew it'd be hit or miss on whether we'd have to stop (it's not super busy but it is a highway!).  There were volunteers at the intersection yelling at runners when traffic was coming.  They were yelling at me to stop, and I came really close to just going because I thought I could make it, but in the end I did stop for a car.  I only lost a handful of seconds, but it was more the losing my rhythm part that was annoying.

Once I got through the long incline part I was relieved, but still running into the wind until the final mile.  We were passing through slower 10k runners at this time, which mostly helped but at times was a trick because they were blocking the tangents.  I tried to push and enjoy, and I really loved this race experience, but of course was also ready to be done towards the end.  During the final mile I kept telling myself, "You have more to give" and pushing.  After the final steep uphill about a quarter mile from the finish, I really tried to kick, even more so once I realized I could be under 1:20!  I ran a 20k time trial in 1:20:35 in September on a better course, and did not expect to beat that time, so seeing the 1:19 was really exciting!  I came through in 1:19:41 with a smile on my face.  The course is certified, meaning it is 12.43 miles on the tangents, making my average pace 6:24.  My finishing video is here. 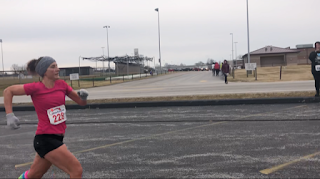 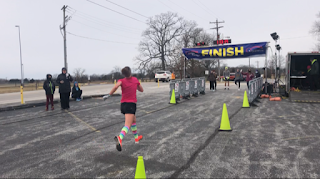 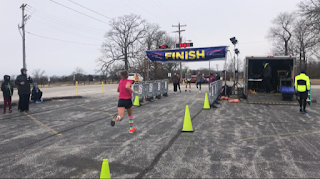 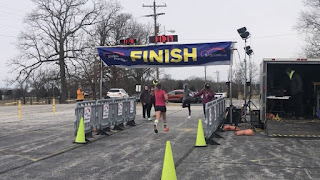 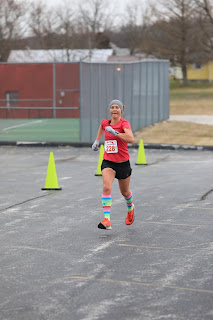 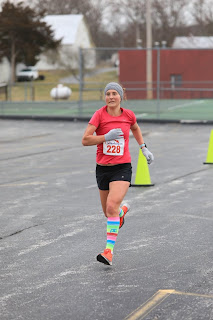 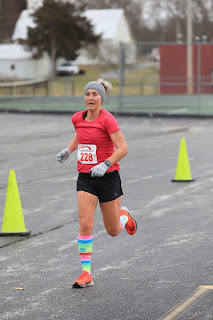 20ks are not a common race distance, and I knew barring disaster I would break the existing age 40 record of 1:37:49, but I wanted to set a record I was proud of.  I also set a 20k PR, even if you count the time trial I did 5 months ago (which I wasn't counting, until I beat it, bahaha!)!  It's not quite as fast as my marathon PR pace (6:19), but for the circumstances I think it was solid.

I had 20 miles total on tap for the day, which meant a 5 mile cool down (I'd run 2.9 miles to warm up, so if I'd have done the math more precisely I'd have known I could do "just" 4.7 to cool down).  I drank some Ucan after finishing the race and then took off with Colin, Trae, and Casey.  Casey turned back after a mile since she'd already run quite a bit after her 10k to cheer for us 20kers, and Colin and Trae were kind enough to run with me back to pick up my arm warmers (note to self: they are not needed even in a 22 degree wind chill).

About 2.5 miles into the cool down, I started bonking hard!  I felt like I had zero glycogen and very low blood sugar.  Around mile 3 we passed a course aid station that they were packing up and I stopped and asked them if they had gels, and they did!  They gave me a package of fruit snacks, a package of chews, and a gel.  I was laughing that I was going to have to eat 3 things just to get through the final 2 miles of my cool down.  Once I got the fruit snacks down I started feeling better, although I was still 100% ready to be done.  But once we got to about 4.5 I guess the sugar was in my system and I felt okay again.  This was definitely a lesson I needed to learn about fueling!  I can run 20+ easy miles fasted without a problem (although I know that's not ideal, I have done it many times), but once fast running is thrown into the mix I need so much more fuel!  Before the race I had a handful of Cheerios and most of a drink with 2 scoops of Ucan in water (also nuun energy but that's just electrolytes and caffeine), during the race I had a gel, and then between the race and cool down I had the rest of the Ucan.  That was not sufficient!  Next month when I do a half marathon race with a lot of miles after I am definitely getting up early enough to eat a full meal for breakfast and taking Ucan and gels with me on my cool down.  The final 2 miles of that cool down at 8:30ish pace was harder than the 12.4 miles at 6:25 pace!

After finishing the cool down, we went inside to change, socialize, and eat the amazing post-race lunch!  Chicken noodle soup, grilled cheese, and cake have never tasted so good.

At the time I'm writing this, the official results have everyone in the 20k running about 2:15 faster than we actually did [2/9/21 update - the results have been corrected!].  If there is going to be a timing error, it's nice when it makes you faster, but with it being a record I'd sure like it to be correct!  I've had timing errors in the other direction (i.e., slower) with this results company too, so in a way it feels like I'm getting all of that time I was cheated out of back, but in the interest of full disclosure my time and record should be 1:19:40-something [corrected official gun time is 1:19:41].  I would buy 1:19:30-1:19:50 for watch error, but definitely not 1:17:32, unless we are talking grade adjusted.

I can't wait to do this race thing again!