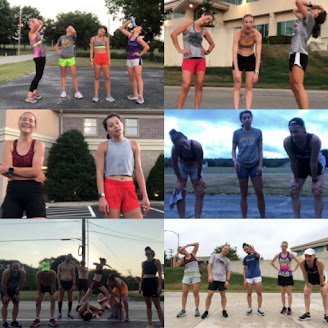 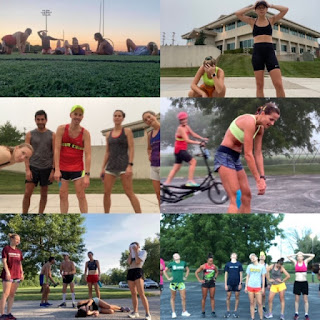 Books:
Theme for the month:
Indecision.  I've figured all along that the reason for my hip issue was probably because God knew I wouldn't deal well with the COVID-19 uncertainty of every race from March 2020 on, but this month made me even more sure of that!  I had a hard time deciding if I should target a race and found it difficult to do that knowing that any given race may not happen.  It's harder than you realize to direct your training without targeting a race, and "be in good shape and ready to jump into a race" is a vague goal.  Also, I like control!  I think that's why I'm embracing doing some time trials: they will happen.
Posted by Sara Ibbetson at 4:19 PM 6 comments:

Since I don't expect to have many/any race recaps this season, I thought I'd recap some of the time trials I do. Next time I'll have a better name - my running group is doing two "Pick Your Poison" track time trials in September.

My coach put a 5k time trial on my training schedule for August 21.  I think she mainly wanted to see where I was at and get my max heart rate.  I knew I wasn't in top shape so it didn't feel like a big deal, but at the same time I treated it like an actual race.  Even though I wasn't in PR form, I still wanted to get the best out of myself that morning.  I drank Generation Ucan and caffeinated nuun when I woke up, and also sipped on more nuun between my warm up and the time trial.  I wore an old pair of racing shoes, changing shoes after my warm up which always helps with the mental "I'm going to run fast" piece.

I'd run a 2 mile time trial one week before in 12:13.  I hadn't felt the best that day, and ended up having mixed feelings about the result - it would have been a good time for me 5 years ago but was slower than my PR half marathon pace from 2019.  I mostly looked at it as information, plus after 15.5 weeks off from February through May I'm thankful to run any pace.  For some reason, I just knew I was going to have a better day for the 5k time trial, so I decided I'd try to run it at the same pace, or about 6:06, hoping to sneak in under 19 minutes.  It was 58 degrees, which I also knew would help immensely (it was 72 with 100% humidity for the 2 mile).

Three friends (Casey, Rebecca, and Missy) decided to run the time trial with me, which made it exponentially more fun!  We warmed up together, and Missy and Rebecca said they planned to run the 5k, while Casey was undecided.  She ended up deciding she'd do about 2 miles, and try to stick with me (if you know Casey, you know that means be a step ahead of me!).  And, we were off!

Casey and I settled in side by side, at a clip that felt fast but reasonable, with Missy and Rebecca right on our heels.  I looked at my watch once early to see 6:03 average, which was about what I wanted.  I focused on working with Casey, and we went through the mile in 5:54.  Her watch beeped a little before mine for a 5:50 first mile, and she stopped at that point.  I was expecting her to run through at least 2 miles, and kind of thought she'd end up running the whole 5k with me then probably out-kicking me, so that threw me momentarily since running with her had helped so much.  I could hear Missy fairly close behind, though, so that helped me keep pushing, although I did let up a little during mile 2 for a 6:02.  Casey jumped back in with me for a bit during the final mile (we were on a 0.8 mile loop course), which helped tremendously.  I was determined I was going to get my pace back under 6:00 for the final mile, and I did that with another 5:54 and a final 0.13 kick at 5:36 pace.  I stopped my watch a little late, at 3.13, but I figure most road courses with turns read a little long anyway.  My time for the 3.13 was 18:35, with an average pace of 5:56.  The activity is on Strava here.

I was really happy with this one!  I thought 6:05 pace would be a fantastic day right now, so exceeding that was exciting, but also I just felt so good while I was doing it.  The cooler weather was a huge factor, but I'm getting stronger again and it's a great feeling.  In mid-June my heart rate was 170 (it averaged 168 for this 5k) running 7:45 pace - I am not exaggerating!  I started some workouts with Christian in July but typically felt like I was just hanging onto her.  The way I felt during this run was how I want to feel!

The Missouri state road racing record for my age (39) is 18:33, so now I want to find a certified 5k race in the state that is actually happening before my birthday on October 26 - which so far hasn't been a fruitful search.  There are a lot of small 5ks, but very few are certified.  I do appreciate the irony that I am actually seeking out a 5k - I am not 5k runner, but I really enjoyed this time trial!