Bill Snyder Highway Half Marathon: It may have been a bad idea, but I'd probably do it again!

I readjusted my goals for this race after being diagnosed with bronchitis about 44 hours before it.  I knew I wouldn't be able to run the PR I'd hoped for while wheezing and taking antibiotics, plus it ended up being 72-80 degrees and 90% humidity during the race.  I hoped I could go for the overall female win, and I was able to accomplish that with a 1:23:32 half marathon, which bettered my previous on-antibiotics-PR of 1:28 -- you've gotta take the PRs you can get, right?!  I was happy with this for the circumstances, but, as I think I've said many times, I'll be back to chase that real PR! 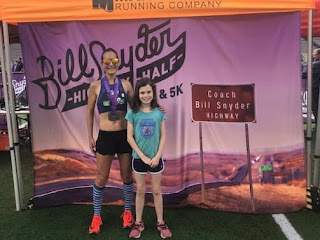 I ran this race last year, and it again fell 4 weeks before Grandma's Marathon, so I thought it was the perfect checkpoint to see how my fitness stacked up to where I was at last year at this point in time.  Just like last year, I planned to train through the race (no taper), but I also hoped to go for a PR and to run about 2 minutes faster than I'd run at the 2018 event.  A week before the race, I was feeling strong and hopeful since I'd been hitting solid tempo workouts just under 6:00 pace running alone.

6 days before the race, I started wheezing, especially when laying down.  I had a slight cough and minor congestion, but no other symptoms.  I didn't feel sick and wasn't weak.  Since I felt fine, I was sure it was just allergies and continued on with my week.  4 days before the race, I had a sub-par workout, but I blamed it on being just a few days off of a 24 miler; I have never nailed a workout soon after a 24 miler.  3 days before the race, I started getting more concerned, because although I still felt fine, my wheezing wasn't going anywhere.  2 days before the race, I want to the doctor and was diagnosed with bronchitis and started on Z-pack antibiotics and an Albuterol inhaler.  I asked my doctor about racing, and she said if I felt up for it I would probably be okay run it, considering I'd been training normally all week.  Since we had two days of family fun planned in Manhattan along with the race, I decided to go ahead and run it, but I also knew my performance wouldn't be my best.  I had an outside kernel of hope that I'd wake up race morning miraculously cured, but, alas, that did not come to fruition.  At least there was no pressure! 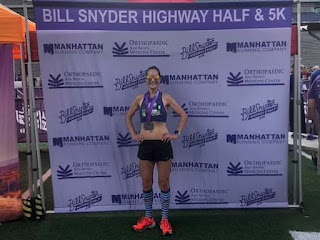 Race morning ended up being very steamy, already 70 degrees with a dew point of 68 when I left my phone with Jon just before 5:30 a.m.  He dropped me off for the buses that drove us to the start of the point-to-point course.  I felt somewhat weak on my 3 mile warm-up, but not terrible.  I reasoned that if I ran a mediocre workout on Tuesday while wheezing, I could run a mediocre race.  My coach had mentioned trying to run it at marathon goal pace, but that seemed a little ambitious, so I decided I would mainly try to place as high as I could and just see how I felt once I got going.

The temperature was rising quickly, and the sun was out in full force for the 7:00 a.m. start.  As we were off, I found myself in third overall female position, but the two women in front of me had been standing with the 1:30 pacer on the starting line, so I wondered if they were going out too fast.  One of them fell back fairly quickly, and I decided I'd pace behind the other who remained.  She looked like a fast runner - I hate when people surmise running ability based on looks, but she had great form and was running smoothly, in addition to being lean and muscular.  We were running in the 6:20s, and I thought that was probably reasonable for me for the conditions (I was planning to aim for 6:00-6:05 healthy and in good weather).  But I also didn't feel very strong and was coughing, so I had several moments where I worried I was getting in over my head by sticking with her.

By mile 3, my doubts faded when I began to feel better and she began to slow significantly enough that I decided to go on around her.  From about 3-10, I felt pretty decent, although still coughing sporadically, and I focused on pulling in men in front of me.  I didn't look at my watch after the first 3 miles, plus splits in this race aren't that meaningful due to the elevation - miles 1 and 6 have major drops, miles 11 and 12 have climbs, and the rest has some gentle inclines and declines but is mostly flat.

I took water at every aid station, usually two cups, and sipped some before pouring the rest on me.  I also took a gel, sucking it down slowly between about miles 5-8.  I usually don't take gels during halves, but antibiotics seem to make my blood sugar low and I thought it would help with that, plus some more practice running hard with them in my stomach before my marathon can't hurt.  Around mile 9 I passed a friend of a friend who I'd been planning to pace with for a 1:18-1:19 before my bronchitis debacle, and he said the heat was really getting to him.

In the final 5K, I was also getting very hot and the two climbs that didn't seem that bad last year felt like mountains.  Whenever I'm not at 100% strength, I seem to struggle much more on uphills than I do on flats.  I'd passed a man around mile 10 who was fading worse than I was, and the next man was out of reach, plus from spectators' comments I knew I had the female win secured, so with all of these factors together I had a hard time pushing.  Really the whole race, I never felt like I was running all-out, but I also felt like I sure couldn't run any faster!

I was happy to see the stadium in the final mile, and managed a finishing kick as I ran in to finish on the 50 yard line.  The finish on the turf was a great touch that was new this year for the race.  The announcer was extremely enthusiastic and announced that I was the first female finisher, and I came through with a smile on my face.  It is always fun to win a race!  As I walked to find my family, many people stopped to tell me congrats, which was very sweet.  Several minutes later, I realized that they were showing all finishers coming in on the stadium's Jumbotron - another nice touch! 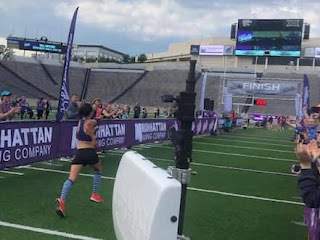 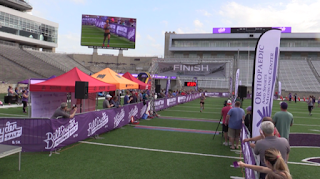 The official results are here; scroll down for my finishing video, which might be the only video of myself running that I have ever liked!  Editor's note: the announcer pronounced my last name wrong, it's a short I.

The famed K-State football coach Bill Snyder presented the awards, and my sister-in-law graciously took my plaque to him for an autograph after the ceremony when she got her medal signed.  After I received my award, I was interviewed by a reporter from a Manhattan newspaper (I haven't been able to find the story online) and congratulated by a lady I'd talked to on the bus who exclaimed, "Why didn't you tell me you were an elite?!"  Haha!  Albani played with her cousins on the bounce houses on the infield and enjoyed meeting Willie the Wildcat. 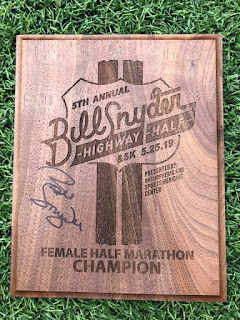 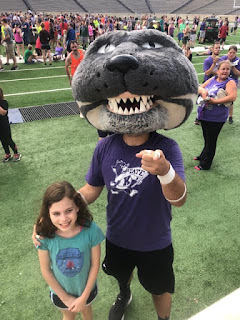 My time was almost identical to what I ran at Rock the Parkway 6 weeks prior (1:23:35 there), so one thing the race showed me was how much fitness I've gained in 6 weeks.  Conditions were perfect for Rock the Parkway, while quite imperfect for this one; basically, I was happy with my performance under the circumstances but I was unhappy with the circumstances!  But, I don't have a good race-time gauge on where I'm at fitness-wise now, which scares me going into a marathon.  A few days after the race, I realized that I ran a little slower (1:23:53) in a half marathon under similar steamy weather conditions (without bronchitis!) 4 weeks before I ran my 2:47:14 marathon, so that is encouraging.  I will also never forget the death march that was the Dam to Dam half marathon, where I ran a 1:26:19 in similar hot and humid weather while healthy.

I knew that I wouldn't race my best being sick, but what I didn't consider beforehand was how much running hard would take out of me.  I am sure the temperature and the non-stop day of family activities afterward didn't help (I walked over 6 miles on top of the 19 I'd run), but I felt awfully weak the next 2 days, for the first time feeling like I truly had bronchitis.  Based on lessons learned from my last injury, I even took a day off running to recover.  Would I recommend racing when sick to others?  Probably not.  Would I do it again?  Probably so...

After the race we had a fun family weekend in Manhattan as planned!  A few of my favorite photos:

Posted by Sara Ibbetson at 6:12 PM No comments:

April is a time of transition - April 2019 recap

Life events:
Books this month:
Theme of the month:

Building.  I am building back to fitness (I think!), and building a little confidence.
Posted by Sara Ibbetson at 3:06 AM 2 comments: