Since I published December's "What I'm Craving This Month" post so late, I decided to skip January, but the second half of January can be summed up by:
Overall, I've been craving carbs and sugar like a madwoman this winter.  I think this is a combination of an adaptive response and a major mood slump.  I am currently 7 lbs heavier than I was when I ran CIM, and I am no longer freezing cold all the time like I was before I gained this weight.  I kept saying I was going to gain 5 lbs after my marathons because I was tired of being so cold, and then I over-achieved, haha!  Once I started gaining weight it was like my body sure wanted to pack it on.  The +5 lb goal was because I think I race best when I'm in a certain 5 lb range, and I was racing at the bottom of that range last season, so a 5 lb gain would put me at the top of the range, while presumably making me not freezing constantly.  For those following the math here, that means I am now a couple of pounds over my preferred range, but I imagine I'll be back within it before any important races.  Weight is a tricky discussion with running, because it's so important to be healthy and well-fueled, but at the same time it's basic science that you won't race as fast if you are carrying extra weight for your body (which is not the same build as anyone else's body).

I was really excited to try this whole grain naan and beet hummus when I saw them at the store, and they did not disappoint.  I like beets, but if you don't like them this hummus is not for you (if you are trying to like them, start putting just a few slices in your smoothies and you won't even notice).  I used to make my own hummus and bean dips often, and need to get back to that. 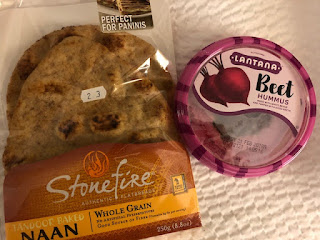 It would have been better to get a photo of the actual wrap, but I woofed it down and it was amazing.  I don't think I've ever had anything Amy's brand that I didn't like, but I wish it was cheaper.

Chicken curry from our favorite nearby Chinese restaurant.  Their portions are so big I got two meals out of this, which is rare and really saying something. 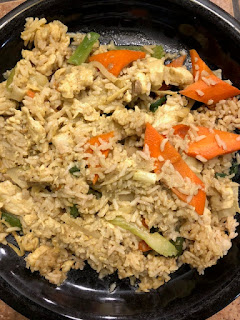 Fish tacos on a work trip.  I need to make these at home so I can make them healthier with whole wheat tortillas and brown rice, but for a restaurant meal this wasn't the worst. 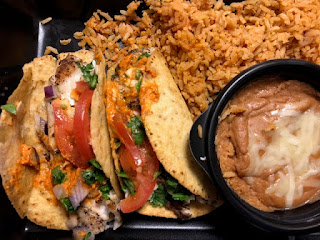 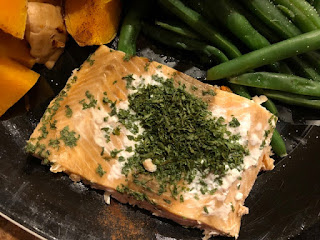 Date rolls with almonds and coconut are really great when I crave sweets, which is all of the time currently. 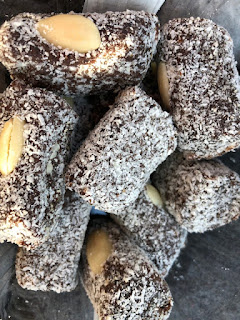 Baked potatoes are always a staple in my diet, and I like to experiment with different toppings.  This one has black olives, parsley, and nutritional yeast (immunity boost!).  I once read that a white potato has more potassium than a banana so they are really good for runners. 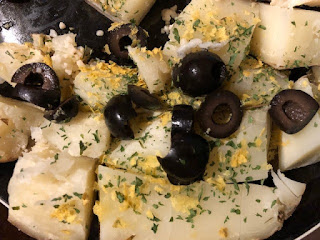 This isn't a craving, but I wanted to include it because I think these have been instrumental in keeping me healthy through the winter cold and flu season. 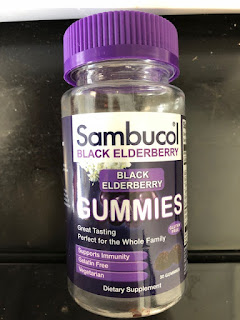 These are fantastic tea flavors.  I add a splash of almond milk.  These are both caffeinated, but at work they stocked a de-caf cinnamon variety that got me through my caffeine tapers before CIM and Houston. 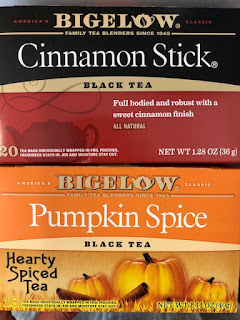 Until March!
Posted by Sara Ibbetson at 5:14 PM 1 comment:

As of 1/1/18, I was officially 4 years into my workout streak!  I nearly forgot about it when I unintentionally got caught up in my first ever running streak from 6/20/17 to 1/14/18, and Facebook memories gave me the reminder that I forget about it every year until sometime in February!  Funny, I am still more proud of my not-quite 7 month running streak than I am of this 4 year workout streak.

I began the streak on 1/1/14 when was struggling with an injury and couldn't run, to help me be consistent with cross-training.  I made my own rules, which simply require a minimum of 10 minutes per day of exercise to "count".  It's rare that I only exercise for 10 minutes, but that leniency came in handy when I was suffering through cryptosporidium, when I had whatever intense virus I had 11 days before the Prairie Fire Marathon in 2016, during tapers, and in the first couple of days after marathons.  Plus, when I started the streak and couldn't run, on days that I dreaded cross-training it was easy to think, "Just 10 minutes and I can stop", which would get me started on the spin bike or whatever, and once I got going I'd go for a longer duration.  Let's face it, 10 minutes of anything isn't worth the laundry so you might as well get in a decent chunk of time!

I don't really think this is significant in any way, but I also don't think I'll be letting it go!  Hopefully I can be a 90-year-old lady still plugging away at this crazy meaningless streak.  If I make it until I leave this world, someone note my total streak days in my eulogy, please!

Recovery, not Resolutions: January in Review

Total mileage for the month:  207 - This should be my lowest mileage month of 2018!  Towards the end of the month, I did the math to see if I was going to make it over 200, concluded that I wasn't, and made peace with that (after an initial urge to add mileage) -- but I think I forgot to include Jan. 31 in the calculation, and that was the difference.