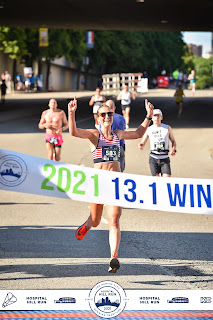 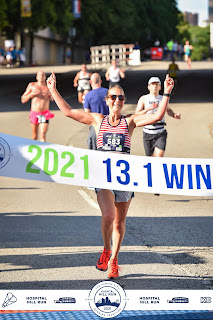 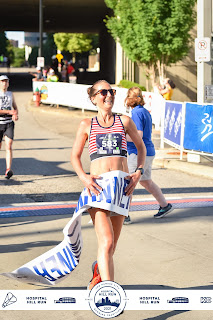 After I finished some of the race staff took my photo, my parents took pictures, and a race official asked me about the event and how easy the course was to follow (answer: it was great, except the runners behind us who were going out when we were coming back moved over to the shorter route lane of the road, so we ran the longer route going both out and back, which added a little distance).  I met back up with Josh and Andrew, who both finished right behind me.  Andrew was pleased to hit the 1:25 goal - pre-race we'd hypothesized that 1:25 on that course in the heat was like 1:20 on a good course in good weather, then post-race he determined that temperature calculators like this one give us 14-18 seconds/mile, and the course (based on Strava GAP) gives us 4 seconds/mile, so our performance probably is equivalent to a 1:19-1:20.  This premium Strava user finished not far behind me, so you can look at his grade adjusted paces.  I have enjoyed running races that I know I won't run super fast in this season though!  I love PR-chasing, but it's also a joy to just go compete and do my best given the conditions, without worrying about seconds here and there.  I also seem to also be doing well on long races with climbs towards the end (e.g., every single race I have run in 2021 aside from the Squirrel 5k), although I will not select courses like this for PR-chasing.

This summer I will be doing a little less mileage and a little more speed work before transitioning into marathon training.  Speed stuff is not my forte but it will be good for me, and I am hoping to challenge my 5k PR.  My next long race (another half) will be August 28, which seems really far away even though it's not, so I'm extra glad I got this one in.  I continue to be amazed at the blessings God gives me through running, especially considering that a year ago I was highly skeptical that I would ever run well again.  That was probably dramatic, but us runners are likely to defer to that when off running or not performing well, so if you are in that situation, don't stop believing!  That time period has made me far less obsessive about times and finding "perfect" races, so I imagine that was part of the blessing in disguise.  I've loved every race I've run this year, but a few years ago I don't think I'd have selected any of them!
Posted by Sara Ibbetson at 5:56 PM