Grandma's Marathon: 20 to bonk to the sweet finish line

This is post #4 of my Grandma's excessively long meticulous recap series; my main summary post can be found here, with links to all of my other posts about the marathon.

After passing mile 20 at the faster end of my goal range (2:05:37, when my goal had been 2:05:35-2:05:55), I could see Raquel up ahead and worked to pull her in, which I did shortly after mile 20.  I ran with her for a short time, and she was very positive and encouraging, but then I got separated from her at the mile 21 aid station and wasn't able to quite pull back up with her.  I heard Lindsey cheering from her bike beside us, I grabbed all of the water and ice I could, I laser focused on the task ahead:  5 miles at 6:20 pace or faster was the objective.
Shortly after mile 21, my downward spiral began.  In other marathons, I've had more of a gradual decline, but this time it hit me hard and fast.  Within the span of a few minutes I went from feeling like maintaining pace was a strong possibility, to feeling like I was out of gas.  My breathing was fine, I didn't have any cramping or pain, but my legs wouldn't turn over like they had been.  My body felt like it didn't have any more to give.  I used all the positive self-talk I could think of.  Even when mile 22 came in 6:29, I didn't let myself worry; I told myself, "You can run the last mile in 6:11, that's what you did here last year and you are more fit now!"

Things were going south, and although I still think Lemon Drop barely deserves to be called a hill, it didn't help my falling apart situation - although whether I was running on flat ground, uphill, or downhill at that point didn't seem to matter.  I kept pressing on, telling myself it could still turn around.  When mile 23 came in 6:45 and I felt like the tank was completely empty, I think I knew I'd lost my chances at the standard.  I didn't let myself think about it, but just continued to tell myself to get in as fast as I could.
And that's what I did - I got in as fast as I could that day.  The final mile was pretty brutal and I mainly hoped I didn't pass out before I made it in!  Giving all I had got me 2:47:44 officially, a time I'm proud of but isn't enough.  When I crossed the finish line 2 volunteers immediately grabbed me, one on each side, and asked if I was okay while helping me to fluid area.  In the moment I was flummoxed; why were they attending to me specifically?  When I saw my finishing videos I understood; I stumbled across the finish line more than I crossed it.
I felt many conflicting emotions as I navigated through the finish chute.  I'd given my all and I'd pulled off a 2:47 marathon, which I thought was a better performance than my other 2:47 since the Grandma's course isn't quite as fast as where I PRed -- Grandma's is fast, but CIM is the fastest course eligible for netting an OTQ on, in my opinion (findmymarathon.com agrees).  But I'd blown up at the end, and I hadn't met my goal of 2:45:00 or under, despite believing I could for a lot of the race.  However, I'd said before the race that I'd rather go for it and bonk than play it safe, and I still felt that way.  In that finish chute I was glad I went for it, and I'm still glad.  I'm thankful I got to experience the power of the packs of women going for it together, and I wish they'd all have gotten it.  Whatever any person's personal 2:45 barrier is, I hope they achieve it!  However, I also hope they find the greatest joy in the process; I know I sure do.  2:47 is just one day, but the process is much bigger and something that brings me joy every day.  It wasn't long ago that I was injured and would have paid thousands of dollars to be able to run one single mile in 6:24!

I was also blessed with having my parents waiting for me by the finish chute.  They were excited to be there and happy to see me doing something I love.  I was mostly positive and upbeat post-race, although I shed a few tears when I called my husband.  It's still hard to reconcile, but what it comes down to is that it is difficult to be unhappy with a 2:47 marathon, but given the 2:45 standard it's difficult to be satisfied with one.
Late additions:
We found the Grandma's Marathon coverage video on YouTube.  I can be seen stumbling in finishing and being checked on my the mascot Grandma at about 4:41:35, also shown below in screen shots for you to laugh at. 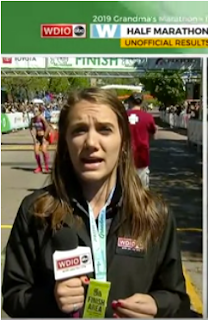 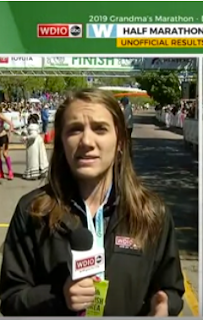 My coach's Grandma's recap is here (I am mentioned as "SI").  I also enjoyed this article on Salty Running about Grandma's, and this blog post re-cap.  My fast friend Jessi was interviewed by a Kansas City new station after netting her OTQ at Grandma's (I pop up in a photo that was shown).

The story continues here...
Posted by Sara Ibbetson at 4:19 PM