Amy and I shared many miles of the 2019 Indianapolis Monumental Marathon, and she really pulled me along during the final few miles. Although we were both suffering, at different points one of us was dying a little less so we leap frogged back and forth, both trying to race the clock that was ticking a little too fast for us.  We’d exchanged names during the race, and afterward I found her on Strava and reached out because she was in nearly all of the race photos my family and friends took that day (including the infamous finishing video my dad took)!  That led to further conversations about giving the OTQ another try and I started following her journey.  You’ll want to read more about her – relatively new to the marathon after a history of competitive figure skating, she balances her training with working as a physician.  Watch for her on the podium in this year’s Flying Pig Marathon! 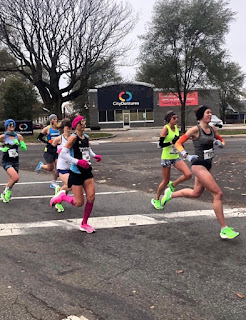 Hobbies/interests outside of running:
hiking with my dog, hanging out with my boyfriend, drinking wine/beer/coffee

When did you start chasing the OTQ and what inspired you to try?
I ran my first marathon in May 2018 in 3:07. The next fall my goal was to break 3 hours and I ran a 2:56 at NYC. I had been aware of the qualifying standard and at that point it seemed like something that was legitimate to try for.

Tell us about the races you attempted to OTQ at and the outcomes.
My first real attempt was at Indy 2019 (my goal for my spring 2019 marathon was 2:50 and to just continue to get faster and stronger and gain more racing experience).  I got close that day (2:46:11), and in many ways I surprised myself with just how close I was able to get to that 2:45. It gave me a lot of confidence and it was a huge PR (by more than 6.5 minutes) so I was thrilled, but also at the same time a little disappointed.

I decided to have one last go at the OTQ at Houston. I had never done two marathons that close together and I didn’t know what to expect in terms of recovery and navigating building up quickly again. Unfortunately, during the Houston race my legs started to feel tired around halfway through. I was able to hold the pace until 18 when I just couldn’t talk myself and my legs into it anymore. I wish that I had been able to mentally overcome that and keep pushing but at that time it just felt so awful and I wanted to stop. I thought a lot of times in those last 8 miles about dropping out of the race, but I’m really glad I made myself finish.

What did you gain from this journey?
Many wonderful new friends and new confidence in myself and what is possible and achievable. I know that I have the potential to get to 2:45 and faster and I’m excited to keep training and keep pushing. It was also humbling and gratifying to learn just how big my “team” is and how many people wanted to help me get there and were rooting for me.

What are you most proud of about your OTQ pursuit?
That I went for it at all! Two years ago this was not on my radar at all as I was training for my first marathon. I’m still pretty darn proud of that 2:46.

Do you have any regrets or things you wish you’d done differently in your OTQ pursuit?
I wish that I had pushed myself through the pain at mile 18 in Houston, but that’s easy to say in retrospect. I also kind of wish I’d done CIM as my “A” race instead of Indy because I had a plantar fasciitis in the summer and it would maybe have been good to have the extra few weeks to train. And there are so many qualifiers from that race. But that’s also easy to think about in retrospect and not worth dwelling on.

What message would you like to send to those following your running pursuits?
There is no reason not to go for it, you never know what you are capable of until you try.

Tell us something unique about yourself.
I was a competitive figure skater growing up and all the way through college. I didn’t start running until I was in medical school and I didn’t train or race anything until 2016. I loved skating but I think I am better now at running than I ever was at skating.

What’s next for you?
Likely will race then Flying Pig Marathon in Cincinnati in May. My goal is to win. I’m also doing Chicago marathon in the fall and maybe Boston next spring since I have never actually done that one yet. 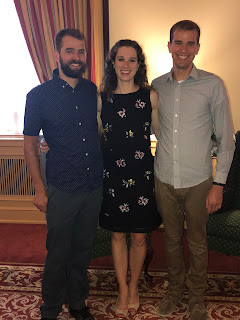 Posted by Sara Ibbetson at 6:09 PM