Kristen’s best friend set the OTQ as a goal for her before it had ever crossed her mind, and once she began chasing the goal she benefited from the online running community, adopting an “If they can try, why can’t I?” attitude.  Kristen didn’t let bumps in her training sway her from her goal, and walked away from this pursuit with a 12-minute PR and newfound confidence.  "It’s a small world" fact: Kristen and I finished 10 seconds apart at Indy before we both gave it a final go in Houston. Read her story and check out her cute pup photos on Instagram! 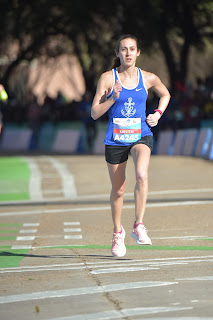 Hobbies/interests outside of running:
I love music, whether it's playing or listening. I don't play the trumpet as much as I used to so it's mostly listening these days. I'm a huge rock fan and go to as many concerts as I can. I'm also a sucker for a good story and oftentimes find myself lost in a book or TV show. I have two dogs, a greyhound and a spaniel mix, and they fully support these lazy hobbies.

When did you start chasing the OTQ and what inspired you to try?
It was never anywhere on my radar until my best friend told me her long-term plan was to qualify in 2020 and said, "you don't know it now, but it's going to be your goal, too." Well that was the most absurd thing I'd ever heard, I'd never run a marathon and never had any intention to do so. Joke's on me I guess, as I caved and ran my first about a year later. Fast forward to late 2018. I had just crashed and burned in my second full and decided it was finally time to get a coach. I had this crazy OTQ nugget of an idea in the back of my mind and floated this to Heather, my new coach, as a sanity check. I was surprised when she quickly agreed this was in reach for me, despite being 13+ minutes off the 2:45 mark at the time. And away we went!

Tell us about the races you attempted to OTQ at and the outcomes.
My first (and what I thought would be my only) attempt was Indy Monumental 2019. I almost didn't even make it to the start line, because as recent as a month beforehand my running was in the tank. I got sick, I strained my hamstring, and I was struggling to even finish long runs, much less make them into a workout. Turns out my iron was not optimal again, but once I got that under control everything really clicked into place. I still didn't really think I could run 2:45, but was excited to see what I could do. I started off a little slow in Indy but was able to keep a good steady pace until I hit the brutal wind on the back half. I still finished feeling strong, something I'd never experienced before in the marathon, and totally blown away by the time I had just run -  2:46:18.

At first I didn't think I'd want to try again - I'd just run a time I never truly thought I could reach, and didn't want to spoil it by being greedy. And doing another marathon in two months? I usually space mine out by a year! But I couldn't live with the "what if" if I didn't give it another shot. I rallied for 7 more weeks of solid training and gave it another shot at Houston 2020. This time around I actually believed I could do it, instead of just relying on everyone else's belief in me. I felt really good and broke away from the OTQ pack around halfway, while still making sure to not get too excited too early. Unfortunately, battling the wind without the pack for shelter proved too much around mile 19 and the wheels fell off (again with the wind, cut a girl a break!). I ran 2:46:43 and while it obviously wasn't what we were hoping for, it still felt like a win for a bad day.

What did you gain from this journey?
A lot of confidence and learning how to dream big! Before this journey, I never thought I could come close to accomplishing something like this. I mean, who did I think I was?? I was just an "also-ran", a good runner but not great. People were going to laugh if I told them this goal. But then I saw everyone else reaching for the stars and thought, well if they can do it, why can't I? This incredible virtual running community has been amazing for me. I mostly train alone without a team, so being able to connect with a lot of awesome runners and share our experiences is so beneficial.

What are you most proud of about your OTQ pursuit?
Learning that fine line between when to quit and when to not give up. I was slated to run Boston 2019, but I was struggling so hard with my first bout of low iron that I decided to cut the season short and recover. It was a tough decision but the FOMO wasn't worth wrecking myself over. Fast forward to the fall, when my body attempted to knock me out again. I wasn't ready to DNS yet another marathon, so I sucked up my pride and let Heather lower my mileage for a few weeks. I became a regular at PT and made a dietary tweak that made all the difference in my running. It's important to take a step back and think, is there something I can change that will pull myself out of this hole? Or am I going to continue to make things worse by pushing it?

Do you have any regrets or things you wish you’d done differently in your OTQ pursuit?
The only real regret I have is not getting a coach sooner. Heather and I have only been working together for a little more than a year now, and I often wonder how much impact an extra year or even six months would have had.

What message would you like to send to those following your running pursuits?
Believe in yourself. Others can tell you that you can do this or that until they're blue in the face, but it's going to be a lot harder to get there unless you buy into it. You're the one out there running day in and day out, and you'll be surprised what can happen if you tell yourself you can do something.

Tell us something unique about yourself.
I love dinosaurs :)

What’s next for you?
I don't think I'm going to do any more marathons this year. I really want to focus more on my speed, 5Ks and 10Ks, maybe some half marathons, and see how fast I can really go! 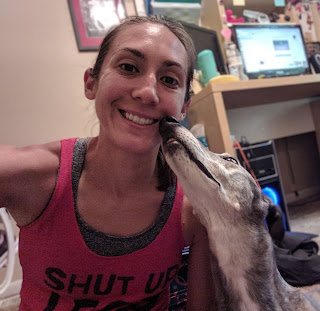 Posted by Sara Ibbetson at 4:07 PM