Julie is grinder!  She has been run-streaking for over 1000 days, and she put in many killer workout efforts leading up to her goal races.  I remember seeing posts about her training and thinking, "she will get it for sure!" about the OTQ.  I also love her love for and enthusiasm about running!  Her posts just ooze running excitement.  She is very supportive and encouraging of other runners of all paces.

I also relate to Julie so much.  We both ran Grandma's 2019 and Indy Monumental 2019, both of us trying to OTQ each time.  At Indy she finished 4 seconds ahead of me, and we shared the heartbreaking experience of passing the mile 26 clock at the time we were hoping to cross the finish line.  I really admire her for honoring her body and not trying again after Indy; 5 marathons in 12 months is a lot. 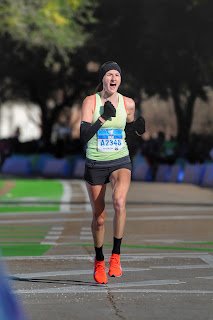 When did you start chasing the OTQ and what inspired you to try?
My chase of the OTQ in my eyes didn’t start until after Houston 2019.

In June 2018, I reached out to McKirdy Trained wanting to be coached under Sarah Bishop. I was a 3:07 marathoner with hopes of breaking 3 hours at NYC marathon that fall.  Through some rough training late summer 2018, I spoke with James McKirdy one night.  I remember very vividly him saying “Julie, you can qualify for Trials”  I literally laughed and said pump your brakes I just want a sub 3.

After fueling poorly for NYC 2018 and bonking hard around mile 16, I ran a 3:02.  Still a PR but not what I had trained for.  I took a week, debated my options, spoke with Sarah and ultimately decided to run Houston ten weeks later.  Ten weeks of more build up and lessons learned.

At the Houston shake out a friend asked what my goal was and I said I’d be thrilled with a sub 3, despite Sarah predicting 2:47-2:50.  Houston 2019 was a magical race for me.  It all came together beautifully with a 2:48. It wasn’t until that race that I truly believed OTQ was within reach for me.

Tell us about the races you attempted to OTQ at and the outcomes.
After Houston 2019, I took some downtime and planned out my spring.  I was already running Boston 2019 but had full intentions of running that with a friend to just soak up the experience.  (My first trip to Boston in 2015, I felt I missed so much of the course and the atmosphere being so serious and ready to race).  My coach, Sarah, asked me three times if I would consider racing Boston for another attempt at the OTQ but I was adamant about enjoying the race.

My first real attempt was Grandma’s Marathon 2019.  Oh my.  That was a tough day.  I was so confident going into that race, running some of the best races and workouts of my life.  The first 10 miles of the race, I was chatting with a huge pack of women, enjoying the day and feeling amazing.  Then around mile 10, far too early in the race, the wheels came off.  The sun was bright, the temperature was rising, it wasn’t long before I was taking multiple cups of water at aid stations.  I had a teammate pass me around mile 18 and I wanted to cry because I just couldn’t move faster.  I stopped hitting my watch for my manual laps with the miles, I was too slow and there was no point.  I remember coming into the downtown area.  I remember seeing my friend just before mile 25.  I don’t know how I got to the finish.   I don’t remember crossing the finish line at all.  Watching video later, I passed out at the finish line, caught by medics and given a wheelchair.  The first thing I remember from after that race was Heather McKirdy telling me “yeah you can go home now” (apparently, I was crying saying “I just want to go home, I just want to go home”) I still don’t quite know what happened that day.

After a reset, some downtime, chats with family and friends, I decided to try for the OTQ at the Indianapolis Marathon 2019.  I made it clear that this was my last attempt, I wouldn’t chase at CIM or Houston for several personal reasons. So all in at Indy. My build up was good, not great, but my confidence was shaken after every race that fall.  Nothing I ran was equivalent to a sub 2:45.  I called Sarah about a month before Indy and said “am I in too deep?  Did I bite off more than I can chew?”  She reassured me and said I’ve done everything she’s ever asked, time to trust.  The race for Indy felt significantly different.  A cold day, but the wind in the later miles would be rough. I started with the 2:45 pace group (shout out to the amazing pacer, Chris, who kept everyone calm and on pace.  During the windy sections, he called for the other male pacers to get to the front to block the wind for us).  I went through the half with them at 1:21:39 and I felt really good.  I thought oh my god, this is going to happen!!  I spoke too soon.  At mile 16, I fell off the pace group.  I was able to hang onto two men, bless their hearts for helping me as much as they could, through about mile 19.  One fell behind at that point and the other turned to me and said “stay gritty” and pulled ahead.  I fought the wind the next several miles alone and it drained me.  I didn’t look at my watch for the overall time.  I couldn’t do the math anyways.  I just told myself to keep pushing no matter what.  With about just over a half mile to go I laid it all out there and pushed hard to the finish.  The clock at mile 26 was heartbreaking; .2 to go and it read 2:44:45.  Damn it.  I finished as strong as I could manage, crossed the line and told James McKirdy “well, I tried” and that’s all I could have done that day, finishing with 2:46:04.  Sixteen minutes faster than I finished the NYC marathon a year previously.

What did you gain from this journey?
I think what I gained most from this journey is confidence.  I still toe the line slightly nervous but also with the understanding of knowing I did all I could to prepare and it is what it is.  Some of the paces during my workouts still scare me but that’s part of training.

What are you most proud of about your OTQ pursuit?
My son is 3 years old.  What I am most proud of is how he looks at me and goes “Mama, I’m fast like you!” and takes off running.  I know he doesn’t understand what I was trying to do, all my very early Saturday long runs so I don’t miss too much of the day with him, but one day I hope he thinks it’s cool that I tried (and that day might not come until he has kids of his own and realizing how difficult it is to balance everything and run at a competitive level!). I am most proud that he’s been able to watch me compete at local races and he’s been able to see me active.

Do you have any regrets or things you wish you’d done differently in your OTQ pursuit?
My only regret might have been dragging my feet in hiring a coach.  I first crossed paths with Sarah in Fall of 2017.  She begged me to let her coach me because I had “so much potential” (yeah sure, you say that to everyone) but it wasn’t until 8 months later that I hired her.  Could I have made another attempt?  Could I have learned the harder lessons sooner?  Otherwise, in 10 months time, I did the best I could in trying to achieve this goal.

What message would you like to send to those following your running pursuits?
Respect your body.  The reason I chose not to chase after Indy because I realized I ran 4 goal marathons in 12 months.  That was a lot of wear and tear on my body.  I needed to be proud of the progress I had made this far and not chase an arbitrary goal.  Know your worth and don’t feel you need to prove yourself to others.

Tell us something unique about yourself.
Fun running facts – I have been running competitively since I was 5 years old.  Took time off in college and then chose to run a marathon while my husband was deployed to pass the time because “no one expects me to win a marathon” (jokes on me now).

Also I’m collecting a half or a full marathon in every state.  Currently I have 21 states and the District, with another 3 states on deck this spring.

Non running fun facts:  A few years ago I started growing my own vegetables during the spring and summer and I’ve become obsessed with that.  I’ve seen every episode of Grey’s anatomy.  I’m basically an MD and can probably perform a Whipple on my own. 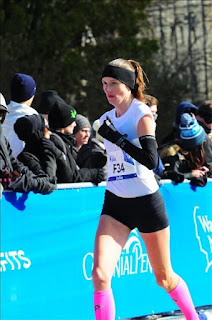 Posted by Sara Ibbetson at 4:35 AM