After reading Tiana's story, I was sad I didn't get to spend time with her at Houston, a side effect of having such a huge OTQ-chase group there!  For her the OTQ initially meant more than just a chance to run in the U.S. Trials; as a dual-citizen, prior to the IAAF rule change, a 2:45 would have allowed her to run in the Olympics for Lebanon. Tiana's Instagram displays many bright smiling running faces, and it's clear that she loves the sport and the other women in it. I admire that she kept pursuing the standard in spite of barriers like injuries along the way. 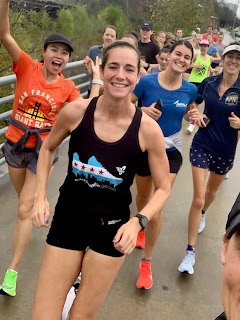 When did you start chasing the OTQ and what inspired you to try?
I started running with the dream of running a sub 2:45 in the summer of 2018. I'm a dual-citizen of both the USA and Lebanon. For the USA, a sub-2:45 time meant that I could run in the US Trials. For Lebanon, running this time meant that I would qualify to run in the Olympics themselves (before the IAAF changed the standard). I had joined the Impala Racing Team (an Elite Development racing team) in San Francisco, not thinking that something like this was within reach for me. Being surrounded by fast, strong, and inspiring women who pushed me to be better made me think that it was worth going for.

Tell us about the races you attempted to OTQ at and the outcomes.
I was supposed to run CIM in 2018, but had to drop out a week before the race due to a stress fracture. I trained hard and ran the Rotterdam marathon in spring of 2019, but blew up after 10K. I finished the race around 3:30, but injured myself in the process. I struggled with ITB for about 4 months after Rotterdam, not being able to run at all. I wasn't recovered in time to run Chicago in the fall, as I had originally planned, so I registered for Houston instead. I trained for 18 weeks for Houston and had one of the best training blocks. The Houston marathon was a dream - I ran representing Lebanon. I felt incredible and ran with the sub 2:45 pack up until mile 20. At 20, I started to feel nauseous so I backed off on the pace; I threw up a couple miles later, and then continued on to finish in 2:55:58 - not the time I trained for, but a time that I'm extremely proud of.

What did you gain from this journey?
I learned so much about myself and my teammates through this two year process. Juggling training with a full time job, while trying to also be a social 26-year-old, is one of the hardest things I've ever done. The support and encouragement I received from my teammates throughout was indescribable - it's made me realize that we really can do anything we put our minds to. I've also gained a deep respect for the marathon itself. 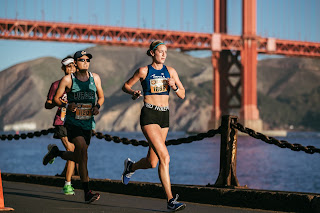 What are you most proud of about your OTQ pursuit?
I'm most proud of overcoming many injuries to be able to continue running and pursuing this goal. I'm also most proud of the day-to-day effort that I put in:
Do you have any regrets or things you wish you’d done differently in your OTQ pursuit?
I'm really happy to say that I don't have any regrets. I'm extremely excited with the progress that I made as a runner, and person, over the past couple of years. I know that faster times are in my future and I feel fortunate to be able to continue chasing my goals.

What message would you like to send to those following your running pursuits?
I want to say a big THANK YOU to my family, boyfriend, friends, coaches, teammates, and colleagues for all of their support. I wouldn't be where I am today without you all.

Tell us something unique about yourself.
I'm ambidextrous - this doesn't really help when it comes to running, unfortunately!

What’s next for you?
I've taken some time off to recover and reflect. I'm excited to run some shorter races this spring in anticipation for Grandma's marathon this coming June, followed by the Berlin Marathon in the fall. 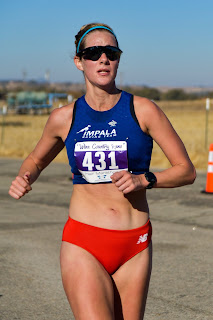 Posted by Sara Ibbetson at 5:44 PM