When Morgan ran by me during the final miles of Indy Monumental, I told myself, "Stay with that girl, she is going to get it".  I hung onto her for awhile, but then she sailed ahead, looking amazingly strong.  After the race I found her on Strava and saw just how close she was.  I then learned that she'd run Chicago 4 weeks before Indy - and watched her go on to run another fast marathon at CIM just 4 weeks after Indy!  I think this woman has recovery superpowers, and clearly she has some awe-inspiring determination.  Her journey really exemplifies how groups of strong women produce more strong women! 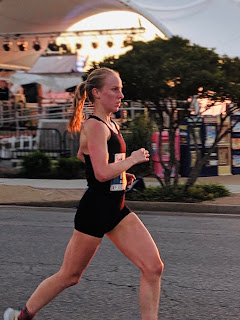 
Hobbies/Interests outside of running: reading books (mostly fiction & memoirs), barre classes, extremely unadventurous cooking and baking
When did you start chasing the OTQ and what inspired you to try?
I became interested in an OTQ as an eventual goal over the last year or so hearing how many of the NYC women I see running each day qualified, and then after running a big PR in the half marathon last March it seemed like a possibility for 2020. After hitting a few good long tempo runs in the late summer and early fall, and with a lot of encouragement from running friends, I decided to go for it.

Tell us about the races you attempted to OTQ at and the outcomes.
This past fall, I ran the Chicago Marathon (2:47:17), Indianapolis Monumental Marathon (2:45:15), and California International Marathon (2:50:15). Three marathons in 12 weeks was very much not the original plan. Chicago was my third lifetime marathon, and a 10 minute PR, but I had some stomach issues in the second half and wanted to give it another go. Four weeks later at Indy, I was devastated when I just missed the standard. I felt recovered a few days later and had the best long run of my cycle the following week, so decided to give the four week turnaround another go at CIM but CIM just wasn't my day - I could tell in the first 10k the race was just going to be a fight to finish and it certainly was. I barely remember the last 13 miles!

What did you gain from this journey?
I had been running for one New York team the last few years but as part of this process of taking a step up in training and racing I decide to join the  Central Park Track Club. The combination of speedy teammates to push me in workouts and phenomenal coaching has been a game changer. As an added bonus, I've expanded my network in the NYC running community! I also learned that recovery a strong point for me. With the guidance of Devon, one of the Central Park Track Club coaches, and some insightful teammates, I found a great post-marathon system of taking some total rest days to repair but also jumping back into some really quality workouts after each marathon.

I've also spent a lot of time thinking about the value of running in my life and really focused on finding ways to use running to maximize joy over the past half year. Joining a competitive team and seeing my running improve has been a great confidence builder. I've also prioritized making plans to run with people every day - I often don't get out of work in time to socialize during the week, but running is a great excuse to socialize at 6:00 am!

What are you most proud of about your OTQ pursuit?
I'm really proud of cutting 12 minutes off my marathon time in a year! I keep reminding myself that is a huge achievement despite not quite making the arbitrary 2:45 cutoff. And, I'm proud of myself for putting in some huge mileage weeks and workouts while working unpredictable hours. There are days when I sleep 4 hours and get up feeling exhausted to run an 8 miles of tempo in cold rain before dawn, or get up at 5:00 am on a Saturday to get in 22 miles, but those days really are building the mental toughness I need to succeed at the marathon and I'm proud of putting in that work.

Do you have any regrets or things you wish you'd done differently in your OTQ pursuit?
I don't regret anything about my training cycle. I suppose I do regret my 6:30 25th mile at Indy... I felt incredible that weekend but got a little too excited early in the race and wasted some energy, and then panicked when I dropped off a pack and ended up alone. With hindsight, I know the group I dropped from was running well under pace, and I should have stayed calm and found another pack. I ended up running much of the second half alone, and wasn't calculating my time well at the end, vacillating between thinking I was well under the goal and that I'd lost too much ground. I started losing focus the last couple miles and slowed a bit, though my body was still okay, and it wasn't until a guy started yelling at me to sprint with a half mile to go that I realized I was probably just going to miss it.

What message would you like to send to those following your running pursuits?
Find running buddies to get you out there each day, both literally and figuratively. I've never had any trouble with the discipline of getting myself out the door every morning to run or do a workout, but my execution of workouts when alone was often poor. I would then try to cram another workout in too soon, and was running myself into the ground without actually hitting many quality workouts. Running workouts in a pack allows me calm down and zone out a little, and my workouts more recently have been much harder but with more recovery days, which has been a game changer.

I am also so grateful for my countless runner friends. Many of my closest friends are runners, from my college teammates to the crew I ran with in law school to my New York network. Beyond my regular morning running dates, I can usually drag someone out with me when I'm traveling for a wedding or bachelorette party. I'm not sure I ever would have tried a marathon if it wasn't for the encouragement of many of these special people, especially one of my friends from law school who taught me to love the journey of marathon training by letting me accompany her on her long runs for years before I considered signing up for my own.

Tell us something unique about yourself.
Unique only for a marathoner - I really enjoy explosive training like sprints, plyos and lifting. I was a middle distance runner in college, and I never really lost the satisfaction of getting to rest after just a short push of hard work!

What's next for you?
I'll be dropping back down in distance for the NYC and Brooklyn Half Marathons, along with some 5K-10K races, over the next few months! Big picture, my eyes are very much set on 2024 already. 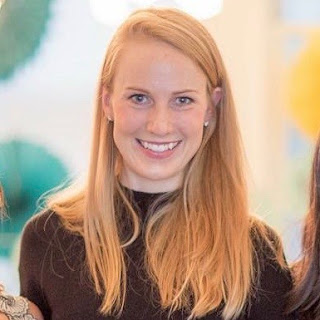