When Elle’s surgeon told her she may never be able to run competitively again, she looked at him and her husband and said, “watch me”, before showing them two fast marathons!  I began following Elle on social media shortly before she ran her 2:45:12 at the 2019 Houston Marathon.  I felt for her then because I could imagine exactly how being so close would feel.  Learning more about her background, I am inspired by her never-give-up and no-regrets attitude.  I’m sure her future is bright and that she will continue to chase her dreams - and hopefully no more walking over hot coals. 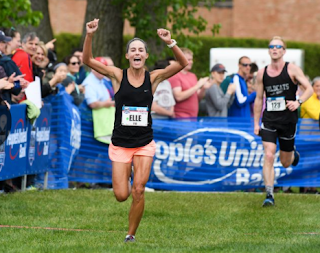 Hobbies/interests outside of running:
I love traveling and drinking wine :)

When did you start chasing the OTQ and what inspired you to try?
In 2017 I tore my hamstring and had surgery to have it repaired. In the recovery room I was told that it was worse than they originally thought, and that I might not be a competitive runner any longer let alone never be able to compete at long distances. I had just started getting back into running after having my children and taking a 5 year hiatus, so this devastated me and in my post-surgery fog I looked at my husband and surgeon and said “watch me.” I had a very long, slow recovery but had an amazing running community around me and two mentors who really believed in me.  It was these two gentlemen who pushed me to run a marathon and in 2018 I ran my first, Vermont City Marathon in 2:51:28, finishing 3rd female overall. After this race I knew I wanted to compete in another marathon and go after the Olympic Trials B standard.

My next marathon was Houston 2019, and I ran a 2:45:12. This race was devastating for me, the questions afterwards of what could I have done differently/better plagued me. I knew being so close I had to attempt it again. I tried to get into Grandma's but the elite field was already full and I knew I needed every second possible and was nervous about starting a minute later so I settled on Ottawa. My training cycle leading up to Ottawa was fantastic; I was hitting my paces and feeling confident. However, once again the marathon broke my heart. Having an unusually hot day, and stomach issues I knew from the start that it was not going to be my day. People were dropping out of that race left and right, and I was just happy to finish.

Once again I found myself back at the drawing board but I knew that I wasn't done trying; so next up Indy. During the fall everything was lining up perfectly. I was hitting PRs in shorter distances, I was feeling strong and ready. I went to Philly to run the half, hoping to get a PR and have a nice confidence boost before the marathon. About a week before that race I was having some hip tightness but didn't think much of it. 5 miles into the race I knew something was really wrong, but I was on PR pace and started having that internal dialogue with myself about whether I should keep going or stop. I did not get another half mile before my body just wouldn't let me go any further, every step was excruciating. I stepped off to the side and started the LONG disappointing walk back. That following week after an MRI I was diagnosed with gluteus medius/gluteus minibus tear.  Still not willing to give up on my dream I threw everything I could at it; time off, tons of cross-training, PRP, PT 2-3 times a week, cold laser therapy, dry needling. Yep, I feel like I tried everything to aid the healing process.

I readjusted my timeline and decided CIM would give me more recovery. My highest weekly mileage in my buildup to CIM was 45 miles, so I knew it was going to be a long shot but I had to try. I made it to 20 miles with the 2:45:00 pace group before I knew that my hip/glute was not going to let me have the day I had been dreaming about. I pulled out of the race knowing that I had given it my all, but totally heartbroken at the same time. I was SO close yet so far away. Those 13 second will continue to haunt me!!!!

So many people asked me if I was going to give it a last shot at Houston; I had a bib and I am not going to lie, the thought was there. But I knew that my body truly needed time and I decided not to go for it again. 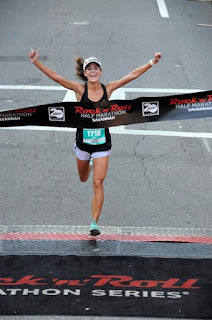 What did you gain from this journey?
This journey gave me confidence in myself. I had a dream that I thought was such a long shot that I was afraid to admit it to myself, let alone anyone else. However, through the process I met so many amazing people who shared the same dream, the same fears, the same let downs and it was amazing to go through it together and have the support of each other. The running community is so amazing!!! I not only gained friendships but I gained a running family from this process.

What are you most proud of about your OTQ pursuit?
I am proud that I decided to go for it, to truly give it a shot and after multiple heartbreaks I kept trying.

Do you have any regrets or things you wish you’d done differently in your OTQ pursuit?
I do not have any regrets, I think I would have regretted not giving it a shot. I think that throughout this process I was able to show my kiddos that no matter how old you are if you have a dream you should go after it. Even if it means failure in the end, is it really failure if you gave it your all?

What’s next for you?
I am planning to run another marathon this spring. I know I can break the 2:45:00 barrier and I need to prove it to myself without the pressure, etc.

Tell us something unique about yourself.
When I was five I walked over hot coals and had third degree burns on both my feet. 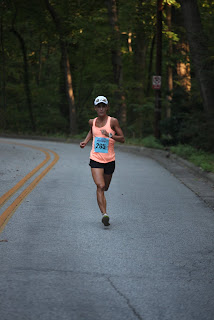 Posted by Sara Ibbetson at 5:12 PM